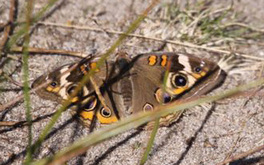 Habitat
Weedy areas where the foodplants are found.

Notes
With climate change this southern species may be expected more often in the province.