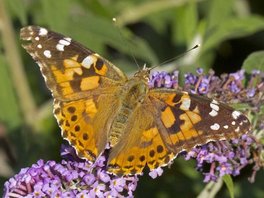 Larval Foodplants
Asters, knapweed, thistles and other members of the aster family. Has been observed feeding on Burdock (Arctium sp.) in Nova Scotia.

Notes
This is one of the most widespread of butterflies, occurring on all continents except Australia and Antarctica. It is called "The Cosmopolitan" in some areas.