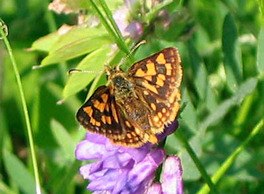 Habitat
Grassy areas, but clearings in woody areas seem to have enough grass to qualify, too.

Notes
This is one of our easiest skippers to identify. Nothing else has this bold chequered pattern. It occurs throughout the Palearctic, and is known in England as the "Chequered Skipper".