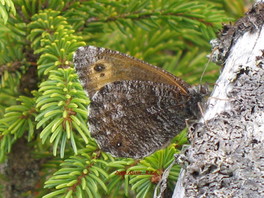 Status in Nova Scotia
Uncommon and very local. There are historical records from Mount Uniacke and Cape Breton; recent records are from Cumberland, Guysborough and Richmond counties. The Maritimes Butterfly Atlas S-rank for this species is "S3: Uncommon, or found only in a restricted range, even if abundant at some locations (21 to 100 occurrences)."

Larval Foodplants
Sedges such as Cotton-grass (Eriophorum sp.), and Carex.

Notes
This species has a two-year life-cycle: the larva passes its first winter as a first or second instar, and its second winter as a fourth or fifth instar.

It has been found in successive years in a Guysborough County bog (2011 and 2012), so these might almost be considered two independent populations of one species living in the same place at the same time.

This species was recently split from the Jutta Arctic, Oeneis jutta. The Jutta Arctic is now considered to be the Eurasian population, while Balder's Arctic is the North American species.