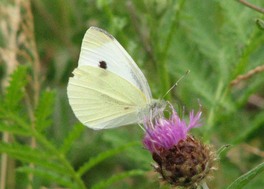 Status in Nova Scotia
Abundant throughout.

Habitat
All habitats, including woodland, urban and agricultural areas.

Larval Foodplants
An agricultural pest species, feeding on cabbage and other cole crops.

Notes
This species was introduced into North America in Quebec in the 1860s, and is now one of our most abundant butterflies. It is also known as the "Cabbage Butterfly" and, in Europe, as the "Small White".