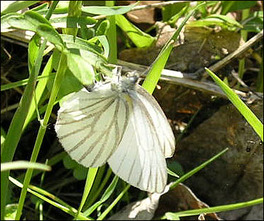 Status in Nova Scotia
Reliable in some locations, but thinly-spread. Ferguson mentioned a colony on the road to Beinn Bhreagh and we collected one specimen there in the early 1980s. We didn't see any in this location on a subsequent visit some years later. Our first recent encounter was in the Parrsboro area on July 2, 2000. With increasing awareness on the part of some observers, this species is now being reported regularly.

Habitat
Deciduous woods and bogs. A colony was found at Tor Bay Beach in 2019, associated with Sea Rocket.

Notes
This species was formerly quite common in Nova Scotia, but is now scarce. Recent research indicates that this may be a different species from the related "Green-veined White" of Europe.