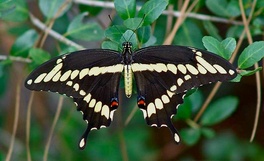 Notes
One record. A "very tattered male" (Ferguson) was collected near Windsor Junction, probably in August of 1901, by Miss Helen King. The specimen is in the collection of the Nova Scotia Museum. In Canada, the species is resident in southwestern Ontario, and has occurred as far east as Montreal. During the Maritimes Butterfly Atlas field period, there were five reports from New Brunswick, including one in the Jolicure area, very close to Nova Scotia. In the USA, it ranges into southern New England.