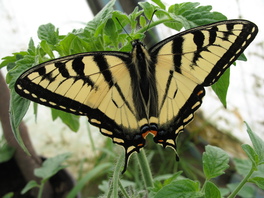 Larval Foodplants
A variety of trees and shrubs including willow, cherry, poplar and ash.

Notes
This is one of our largest and most easily-recognized butterflies. Because of its fondness for edge habitat, it can often be found patrolling up and down roadways. This species was split from the very similar Tiger Swallowtail Papilio glaucus (which does not occur in Nova Scotia) in 1991.