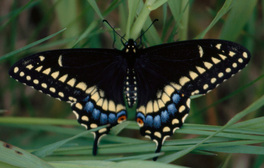 Larval Foodplants
Feeds on members of the family Umbelliferae, including cultivated plants such as Carrot, Parsley, Celery, Dill and many wild species such as Queen Anne's Lace.

Similar Species in Nova Scotia
The only similar species in our area is the Short-tailed Swallowtail, which has only been recorded a few times in the last fifty years.