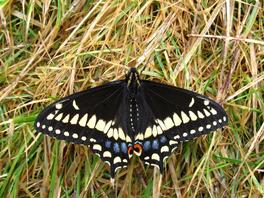 Habitat
Coastal areas, in the presence of the larval foodplant.

Similar Species in Nova Scotia
This species is similar to the Black Swallowtail, but has much shorter "tails". It is also very much less likely to be seen here.

Notes
This species is found only in the Atlantic Provinces and eastern Quebec. It is not known whether stable populations exist in Nova Scotia. It may be that this province is occasionally colonized by strays from Newfoundland. It was first reported from Kidston's Island near Baddeck, in 1936.