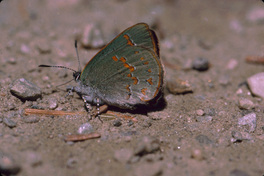 Status in Nova Scotia
Extremely rare. Was collected in the past (1905-1931) around Digby, and 1944 in Halifax (Armdale). Some were taken in the Wentworth Valley in the late 1980s, and one was seen in the Annapolis valley in the late 1990s. The Maritimes Butterfly Atlas S-rank for this species is "S1:Extremely rare: May be especially vulnerable to extirpation (typically 5 or fewer occurrences or very few remaining individuals)".

Similar Species in Nova Scotia
Similar to other hairstreaks, but much greener and lacks tails on hindwings.

Notes
Layberry recounts the discovery that the larvae of this species feed on Beech nuts, not leaves. They begin with the husk of the developing nut and then bore into the interior.