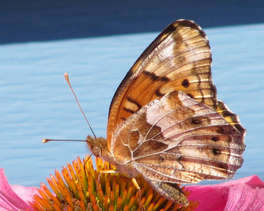 Larval Foodplants
A wide variety of plants, including violets, pansies, flax, stonecrop, plantains and plants from at least six other families [Butterflies of Canada].

Notes
One individual was discovered in a garden in Berwick in August, 2015. This was the first record for Nova Scotia, and the only recent record for the Maritime Provinces. This species normally migrates north from the USA and is regular in the prairie provinces, southern Ontario and southern Quebec.