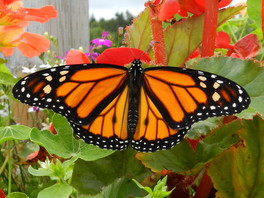 Status in Nova Scotia
Uncommon in spring and summer; more common in fall migration. Breeds in some areas. The Maritimes Butterfly Atlas S-rank for this species is S2B: Rare: May be vulnerable to extirpation due to rarity or other factors (6 to 20 occurrences or few remaining individuals).

Habitat
Almost anywhere during the spring (northward) migration; near the larval foodplants during the breeding season; in the fall commonly near the coast, often in large numbers, all heading south.

Similar Species in Nova Scotia
Beginners may mistake this for the Viceroy. Monarchs are much bigger and don't have the black sub-marginal line in the hind-wing.

Notes
The Monarch migrates into Nova Scotia each spring. Some adults manage to locate patches of milkweed and lay eggs. In the fall, Monarchs are sometimes very abundant in certain locations, notably the Atlantic coast. We think that some of these fall migrants may originate from outside the province. Common Milkweed, the usual larval foodplant, is officially considered a "noxious weed" here and is destroyed whenever possible.