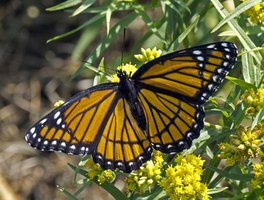 Similar Species in Nova Scotia
Beginners can mistake this for the Monarch, which is bigger and doesn't have the black sub-marginal line in the hind-wing.

Notes
This is the famous Monarch mimic. Originally, it was thought that this was a palatable species deriving protection from its resemblance to the poisonous Monarch, but currently it is thought that the Viceroy may be somewhat toxic as well, thus the two species provide mutual protection.