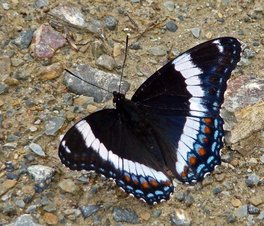 Notes
Prefers animal dung and rotting fruit as food; seldom feeds on flowers. The name "White Admiral" refers to the white-banded form of L. arthemis, which is the form we see in Nova Scotia. This form is also called "Banded Purple" in some older references. The other form (unbanded) is called the Red-spotted Purple, and does not occur here. They were once thought to be separate species.