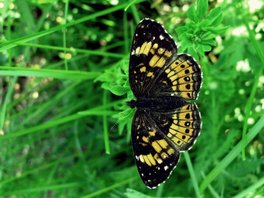 Status in Nova Scotia
Scarce. Only two records from Ferguson: a colony existed near South Milford in 1934 and 1951.

Similar Species in Nova Scotia
Similar to Harris' Checkerspot, but the underside of the hindwing is diagnostic.

Notes
This has also been called the "Silver Crescent".