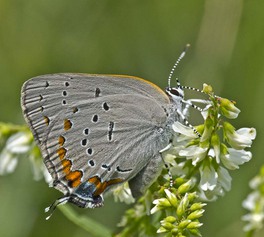 Status in Nova Scotia
Extremely rare. Ferguson mentions several collected from Pictou County during the 1940's and 2 more from Cumberland County August 1, 1952. The first Nova Scotia records for the butterfly atlas period are from the Wallace area, July 20 2014. The Maritimes Butterfly Atlas S-rank for this species is "S1:Extremely rare: May be especially vulnerable to extirpation (typically 5 or fewer occurrences or very few remaining individuals)".

Similar Species in Nova Scotia
All four of our common hairstreaks are superficially similar. The major differences are in the patterning on the underside of the wings. See Banded Hairstreak, Striped Hairstreak and Gray Hairstreak.