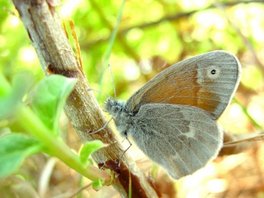 Status in Nova Scotia
Common throughout in suitable habitat.

Notes
This species is present in many subspecies throughout North America, and the nominate subspecies also occurs in Eurasia. It is known as the Large Heath in Britain. We first found it in September 1992 at Brier Island, possibly as wind-blown strays from New Brunswick.